“As a strong cross-party organisation, representing all four corners of England, I will do all I can to ensure that we make a persuasive case to the government.” Cllr Tim Oliver, leader of 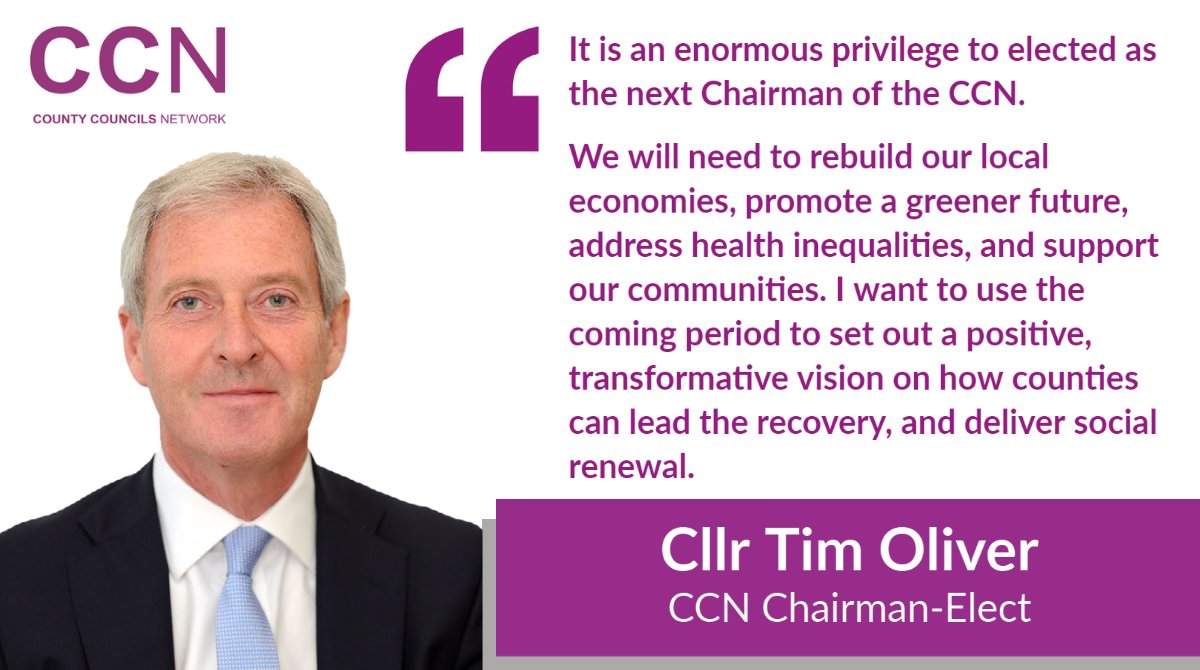 CCN represents 36 county and unitary councils, which collectively serve 25 million people and is responsible for £32bn of public spending each year.

Cllr Oliver, Leader of SCC since 2018, has been elected Leader of the Conservative group for the network – and will now be Chairman in September. Cllr Oliver was elected unopposed to the role.

He said his priority was ensuring that CCN’s 36 councils remain at the forefront of the debate on how the country recovers from the pandemic by setting out a ‘positive, transformative vision on how counties can lead the recovery, and deliver social renewal’.

Cllr Oliver has pledged to work with government ministers to ensure that the levelling up agenda ‘reaches all four corners of England’, and in making the case for county areas to receive sustainable and fair funding as part of the forthcoming Spending Review.

It is also been announced that Cllr Barry Lewis, was elected unopposed as Deputy Leader of the Conservative Group and will be Vice-Chairman Elect of CCN. Cllr Lewis has been the Leader of Derbyshire County Council since 2017.

Both will formally take up their roles at the organisation’s Annual General Meeting on 16th September when all political groups confirm nominations for the cross-party CCN Executive Committee. CCN’s current Acting-Chairman Cllr David Fothergill will oversee the transition to the new leadership over the coming weeks.

“As we move out of the current pandemic restrictions, we will need to rebuild our local economies, promote a greener future, address health inequalities, and support our communities. This will be challenging for all of us, but I want to use the coming period to set out a positive, transformative vision on how counties can lead the recovery, and deliver social renewal.

“This means working constructively with ministers to ensure that the government’s levelling up agenda reaches all four corners of England, while securing greater devolved powers for county and unitary authorities to drive the economic recovery. CCN must also advocate on behalf of its members to ensure planning reforms do not have a disproportionate impact on our communities.

“As we head towards this year’s Spending Review it remains vital that councils have a sustainable, and fairer, long term funding settlement. Alongside this, we will work proactively with the government to deliver reforms to both adults and children’s social care.

Cllr Barry Lewis is the Vice-Chairman Elect of the County Councils Network.