Will our MP soon become MP for Ash Vale??

In the new chancellors’ constituency email, Jeremy Hunt admitted the proposed Constituency Boundary changes were a real challenge. He said:

“This week, the proposals for new parliamentary constituency boundaries in England, Scotland & Northern Ireland have just been published by the relevant Boundary Commissions.

I need to understand the implications of the report, which are terrible for me personally. After proudly representing Godalming, Farnham & Haslemere (and their surrounding villages) for over 17 years, it looks like I will have to choose between two halves of a constituency that is basically being cut in two – a frankly impossible and heart-breaking choice. There is now a 4-week consultation, and I will not be rushing this particularly difficult decision.”

Oh, dear! Now poor old Jeremy has something else on his mind other than filling that big black hole in the nation’s finances. Hanging on to his seat?

Here is the proposed split of South West Surrey:

This includes Godalming, splits Haslemere in half, and adds Shalford, Shamley Green, and Cranleigh and Ash from Guildford. Ash? Really? Not sure going over the North Downs is something we ever do in Waverley!

A University town and a new town – may not bode well for a true blue candidate.

Over a few hours a week ago, Farnham resembled the Wild West as vandals with catapults went on the rampage around the town.

Between 4 am and 6 am on Sunday, 25th September,  businesses and private residences in Farnham were damaged. Officers are keen to speak to the person in this CCTV image, who they believe may be able to help their investigation.

Now Police are appealing to the public for help.

MP Jeremy Hunt said he was appalled at the wanton destruction of premises, including Farnham’s treasured Maltings.

“This is devastating: two vandals smashed up the huge glass panes at the entrance of the Maltings with a catapult, then went on to damage 13 other places, including Lizzie’s Sweet Shop in Downing St.”

The rampage occurred in the early hours when a host of homes and businesses were targeted.

The most high-profile offence saw the front atrium of the Farnham Maltings shattered, leaving the venue with a clear-up bill of around £5,000 – with the repairs expected to cost as much as four times that figure.

Other premise hits included Laly’s chemist, Loaf and Sweet Lizzy’s in Downing Street and Guitar Village and The Prial on West Street.

The Police have come under fire from some for not responding to the incident fast enough. But Police say many of the victims did not report incidents, leaving officers to trawl through Facebook pages to find out which properties were affected.

As a result, Sgt Michael Knight pleads for businesses and the public to work with officers to track down those responsible.

Inspector Sam Adcock, Borough commander, confirmed five incidents were reported over the weekend, and officers have since found another six, potentially linked to a seventh being investigated.

“We would encourage anyone who has been a victim to report these incidents to us either online or through our live chat function.

“My team are committed to investigating these incidents and will do everything we can to identify the suspects and take appropriate action. We would ask that no images of the suspects be circulated on Social media now.”

CCTV footage from the Maltings clearly showed two male offenders, aged around 14 to 17 years old, attacking the building with a catapult at 4.45 am.

Waverley Borough Councillor Carole Cockburn and MP Jeremy Hunt are pictured here with Sergeant Mike Knight, who says the Police have good CCTV footage of the two young men.
Anyone with more information, please call 101 or for the fastest response, use the live chat function on:
https://www.surrey.police.uk/contact/af/contact-us/.

END_OF_DOCUMENT_TOKEN_TO_BE_REPLACED

Last year ‘Your Waverley’ announced that the future of Farnham Museum and Woolmer House, the town’s Grade-1-listed building, was in doubt.

So how about filling all those vacant retail shops in Blightwells Yard with a Farnham Museum? 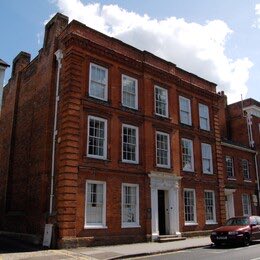 Waverley Executive Portfolio Holder Cllr Mark Merryweather looked sombre as he told the Full Council last year that the treasured property (above) needed an estimated £1.1m spent on repairs. An options appraisal commissioned by the council had been unsuccessful in acquiring grants despite pursuing every possible funding stream.

In early November 2021, there were just six contractors on second fix work at Brightwells and one commented it didn’t look as if anyone was in a hurry to finish any of it. Why would anyone be? The World had moved on long before the first concrete had been poured.”

Another Farnham resident David Wylde said on his recent visit to Sainsbury’s through Cambridge Place, he asked workers when they believed Blightwlls would be finished?

Workman 1:  Two or three years; the buyers of apartments in the completed block that butts onto Cambridge Place were due to move in last October, but can’t because there is no water or electricity.”

Crest Nicholson: Whose mouth has always been bigger than its trousers, according to Mr Wylde.

has taken five months not to tell us how many retail options have been taken up.”

However: Andy Macleod gave this update to ‘Your Waverley’s’ Executive last week. Blightwells coming to Farnham sometime, anytime &#8211; whenever?

In the meantime, Mr Jones has his cunning plan.
He believes moving the Farnham Museum and other public facilities into the empty Blightwells units would take the town forward. Why? Because it’s cheaper for the council to say it will use the space themselves and effectively have built new facilities for the community. Then write off the debt over an extremely long repayment plan.

The debtor retail can be swallowed if the Council uses the space. I realise this sounds simplistic, but sometimes it’s better to think that way rather than the highly professional peple who  seem to have created this disaster. If  the Museum and Library were moved to Blightwells you have two valuable assets , ideal for conversion into residential to sell?

Then there are the numerous social and charitable institutions that if housed together, sharing space,  would offer a central administrative hub for their activities. Thus cutting costs.

You can fill Brightwells, cut the debt and give Farnham residents something they can be proud of.

Let’s see if, just for once, some good can come out of the mire.

Both the present and former council administrations have battled with the problem of how to fund essential works to the important public building, operated by Farnham Maltings, to ensure it remained in good condition.

Here in Waverley, we believe that Woolmer House and the Museum are essential assets, and the museum is giving sterling service. Specialist repairs, including fees and VAT amounting to around £1.2m, and the added threat of inflationary pressure presently hitting the building profession, would further impact the rising building costs.

He warned: “Waverley borough council does not have the funds or capacity to fund the whole thing alone – we  have to look for third party grants.”

The WW also understands from Farnham mutterings that the Museums collection is in a dire state. We will be revealing more in future posts.

Talk about shutting the door after the horse has bolted!

George Eustace,  The Secretary of State for Environment has warned that:

“Climate change is heightening the threat of deluges destroying homes.”

Funny that! We all knew that yonks ago.  The residents over there in Cranleigh including the Cranleigh Civic Society warned that building on the flood plains of the eastern village was just storing up trouble for the future. In fact, the group that speaks up on behalf of the people of Cranleigh took a vote of NO CONFIDENCE  in Waverley Borough Council in May 2017. CROSS OF CRANLEIGH JUST GOT A WHOLE LOT CROSSER &#8230;

Perhaps that Vote of NO CONFIDENCE fell on deaf ears?

Here’s just one of the sites that Thakeham Homes. A developer that was actually afforded the unprecedented honour of joining planning officers around the Waverley Towers council chamber staff table, to speak up for and receive its planning consent.

You can see where building work has started and where now the new homes stand.

However, no surprise here: Thakeham Homes sold the site on to another developer as soon as it received planning consent! It is now aptly named – “Willow Brook.”

&#8216; Your Waverley&#8217; make a site visit to Thakeham Homes proposed new development on a floodplain in Cranleigh.

No worries though. The Government has set aside £860million for 1,000 flood defence schemes as part of a package of measures to protect homes, businesses and infrastructure!