Skip to content
The public consultation exercise on ‘Your Waverley’s Local Plan Part 2 ends on January 29th – just nine days time.
Included in the plan are sites allocated for development in the borough – some highly controversial – others not so. It also includes a section on Gipsy & Traveller sites – where these should be situated and the number of pitches.

Residents in Haslemere are claiming that ‘Your Waverley’ has acted on other Neighbourhood Plans in the borough except Haslemere’s by including the controversial ‘Red Court’ – pictured above –  in their allocation of sites. Residents claim by doing this they are ignoring the wishes of both the Haslemere Town Council and the local community.
So with time running out the people of Haslemere are asking everyone to ensure their voice is heard before January 29 – when the consultation closes.
Last night at Waverley’s Environment Overview & Scrutiny Committee – head of planning Zac Ellwood told members the response to the consultation – so far – had been light with very few responses. However, he expected a rush of comments in the days leading up to its closure.
Outlining the timetable, after responses had been logged and reviewed, in April/May the final plan, which could include minor modifications, would go to the Secretary of State for examination in public by an Inspector. If sound it would become law between November and February 2022.  However, there could be further delays of several months if there were major issues around certain allocated sites.

I am not second guessing, but there has been a lot of debate in Haslemere about sites put forward, and we have to look carefully at the evidence.”

Many residents of Haslemere are up in arms at the proposed loss of this an important green space in their town and have been campaigning for several years to stop development there. Coming to a greenfield in Haslemere soon?
Mr Ellwood said Neighbourhood Plans for other areas including Chiddingfold and Dunsfold was progressing. However, Cranleigh’s Plan had been delayed as a site which it had relied upon would not now come forward for development, so its plan was at a different stage in its progress.
Officers faced a huge amount of work over the coming months, and this was the “calm before the storm.” Staff would need to move fast to meet the time-scale – stressing the adoption of Local Plan Part 2 was vital to show that Waverley had a 5-year land supply.
Developers want to build a phased development (50 homes in phase 1) of 180 homes on The Red Court site off Scotland Lane. Developers Redwood plans to build many more if/when it gets the go-ahead in an Area of Great Landscape Value and Outstanding Natural Beauty on the edge of the South Downs National Park Scotland Lane/Red Court, (AGLV/bordering AONB land, part of the biodiversity-rich Wealden Heath.)
They claim Waverley would be acting in blatant contravention of its own NFFP Government policy. Over 500 objection have been made – however, the Waverley Web wonders if these have been directed at the Consultation on LP2? Hence the call to make their voices heard NOW before it is too late!
Despite 89% of residents being opposed to the plan – three Tory Conservative councillors voted for the Red Court site to be included in LP2.
Draft Pre-Submission LPP2 – Committee Version – September 2020 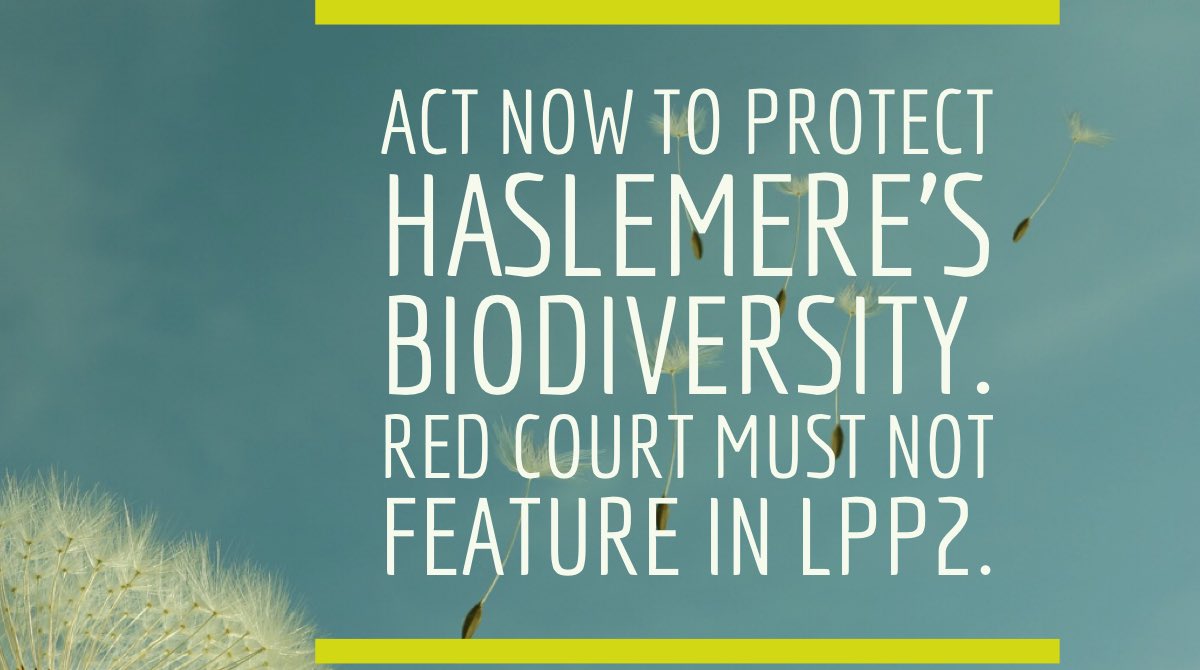 http://Waverley Local Plan consultation closes 29 January Waverley Borough Council is reminding residents, businesses and developers they need to give their views on the draft Local Plan Part 2 by 29 January 2021…Local Plan Part 2: Site Allocations and Development Management Policies, is the second and final part of the borough’s Local Plan and sets out the policies that govern decisions on planning applications and allocates sites for housing in Haslemere and Witley, where individual Neighbourhood Plans are not doing so…Local Plan Part 2 will also set out the location of sites for Gypsies and Travellers and will review other land designations in the borough. https://www.waverley.gov.uk/Council-updates/Read-our-latest-news/ArtMID/1683/ArticleID/17/Waverley-Local-Plan-consultation-closes-29-January

3 thoughts on “Come on Waverley residents? Pile in to help Haslemere.”